Cats – Not the Broadway Musical

When I was a wee little tot, I had a kitty named Tom-Tom Tiger Tom. He was a big orange tabby guy.

He just walked up on our front porch one day and made himself at home. He was an inside/outside kitty. He would come inside most nights and sleep with me. I loved ol’ Tom. A short while after he showed up, a wild black kitty appeared in our carport one day. She was sitting on the battery of the car when my father opened the hood one morning. She and Tom became an item.

Cats aren’t monogamous by any stretch of the imagination, but these two were about as close as they can come to that state of bliss (or misery, depending on your personal tastes). They, of course, had a litter or two of kitties during their time here. One little kitten in particular that I always remember was a calico that my mom named “Patches”. What else, right?

Those kitties all faded away in time, as all things do. Tom wondered off one day and never came home. Mamakitty did the same. All the kittens except one, another black kitty that I named Foxy, were gone also. Foxy hung around for the next decade, living on my front porch mostly. We were never that close. I had dogs by then; mine and my brother’s. I didn’t have anything to do with cats again for 20 years.

When I was a child, I was always somewhat allergic to cats. They’d make me sneeze and my eyes would itch and swell shut. Fun, huh? As an adult, it was worse. I could just walk into a person’s home where a cat lived and I’d start with the sneezing and itching. Well, one day in 1998, my mother, who was terminally ill by this time and under my care, asked me if she could have a kitten. I said, “A kitten? Shit, Momma! I’ll be sneezing and wheezing my ass of if we bring a cat in here.” Then I relented, thinking that my mom wasn’t going to be around for much longer. I told her to go ahead and get herself a kitten if she wanted one.

About three days later, while at work one morning, a buddy of mine comes running into the shop all excited. He tells me, “Eric, there’s a little kitten out in the back parking lot.” So, I say, “Well, so what?” He says, “It’s in the middle of the drive out there.” I said, “Well shit, Robert! Did you just leave it there?” He shrugs and with that we both run out back to see if the little kitten is still there.

It was. Right in the middle of the drive where all the service vans come and go each morning. This was a very big, busy Sears Home Services facility. I picked up the little kitten. It was only two or three days old, I was guessing. It’s eyes weren’t even open yet. I could tell it was a fighter, though. I’ve since learned that you have to be a fighter to survive; be you a human, a cat, or whatever.

I called my girlfriend at the time, Sherry, and asked her to meet me at home. I clocked out and took the little kitten home in a Tecumseh engine box. Sherry told me we’d have to bottle feed it and rub it to simulate the mother’s tongue so that it would urinate and defecate properly. What? Oh, alright. So, that’s what we set out to do.

This tiny little girl was surely a fighter, as I said. We could tell she was a girl because she was a three-color-cat; a calico, in other words. 99.9% of three color cats are female. I remembered that from having little Patches around as a child. Well, mom and I were sitting at the kitchen table bottle feeding the little girl, whom I had wanted to name “Sears the cat”, but mom wanted “Precious”. You know who won that debate. So, I’m feeding Precious and I say to mom,  “Boy! What a little hellion she’s going to be when she gets bigger.” Mom says, “Yeah, I hope she gets along OK with Patches.” “Who?” I say.

Turns out mom had already made arrangements with some lady in the classifieds to bring over a little kitten, a calico also, on this Saturday. Oh boy! Two cats now. Well, ya’ gotta’ do what you gotta’ do, I s’pose. It’s for mom, after all. So, here comes Patches later that afternoon. She’s a beautiful, traditional orange-white-gray split-face calico. She’s about 4 weeks older than Precious. Here’s a pic of me holding both of them a few days after we got them… 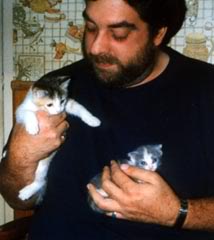 The oddest thing was that from the moment I brought Precious home, I have never been allergic to any cat anywhere ever since. Isn’t that COOL?! Unfortunately, mom didn’t have long to enjoy the little girls. She left this world  a few months later. She never even got to see them grow into the beautiful adult girls that they became. She also never got to meet the little sister that I added to the clan a while later, Li’l Black Kitty. LBK was another feral save for me.

All my cats are inside-only kitties. They never go outside. Their whole world is in here with me where they’re safe from automobiles, assholes, and most sickness. A few years have gone by since the happenings I wrote about above here. I’ve often said that the greatest thing my mother left me when she died was these cats. I LOVE them dearly. People get very close to their pets. They become family members. Folks who don’t understand this have never had a pet… or they’re just… well, something ain’t right with ’em.

I love my beautiful girls. Thank you, Momma. 🙂 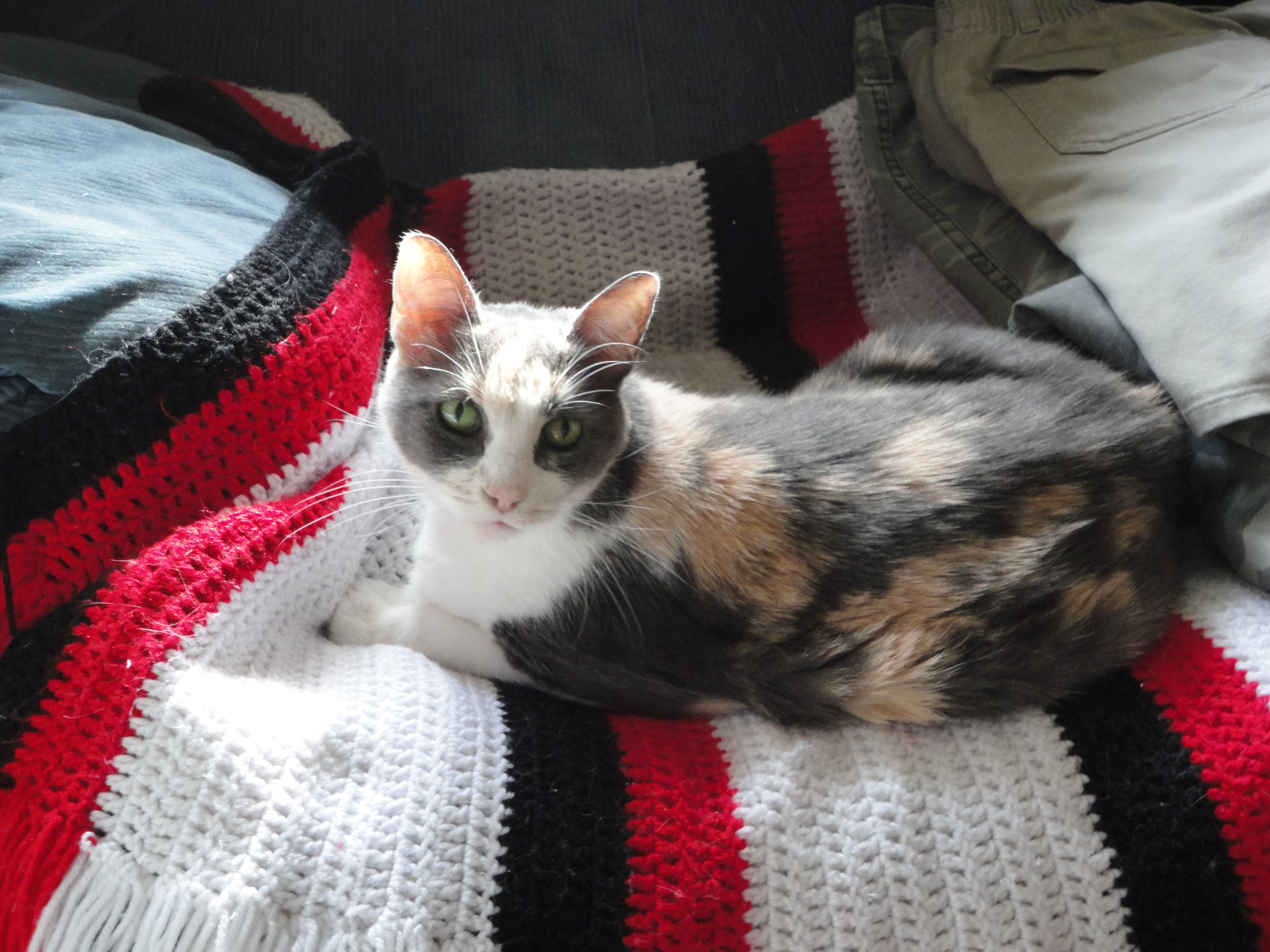 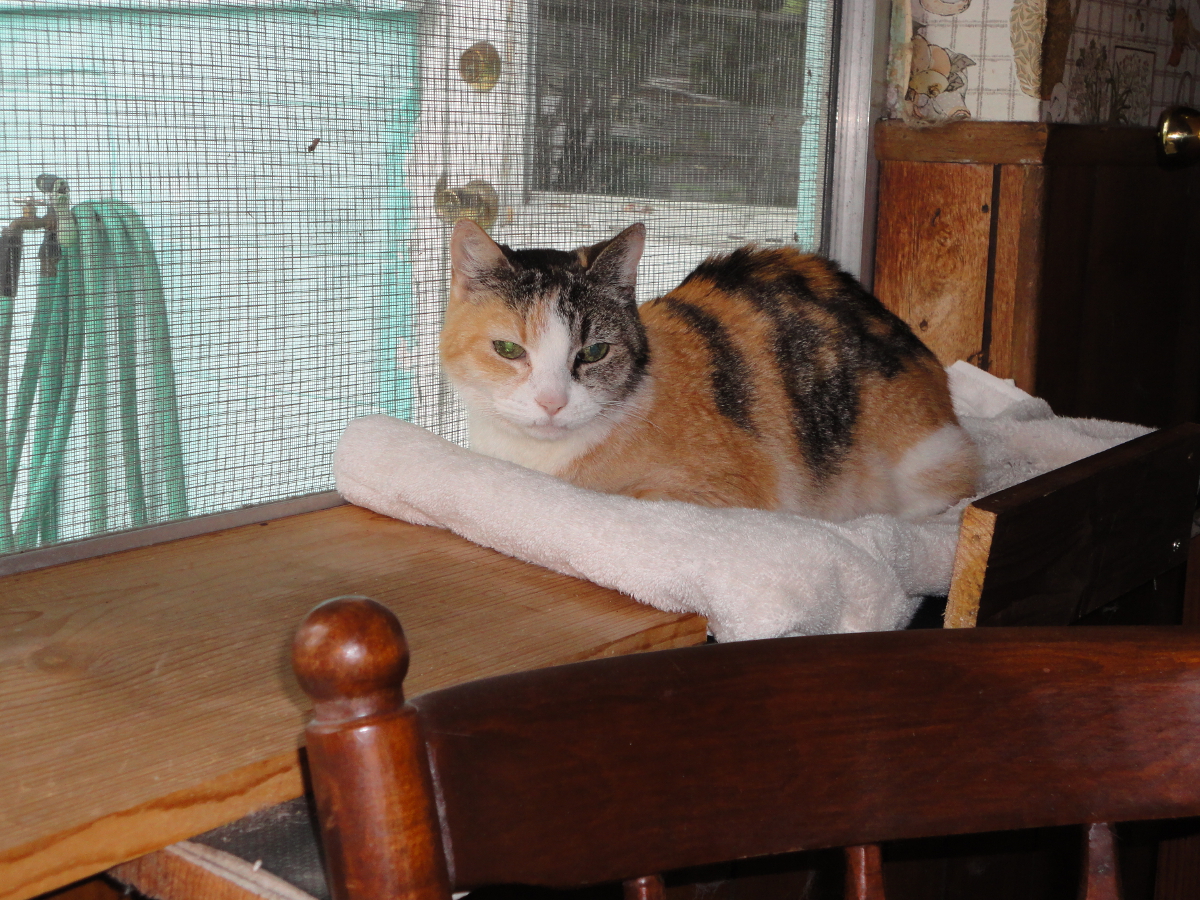 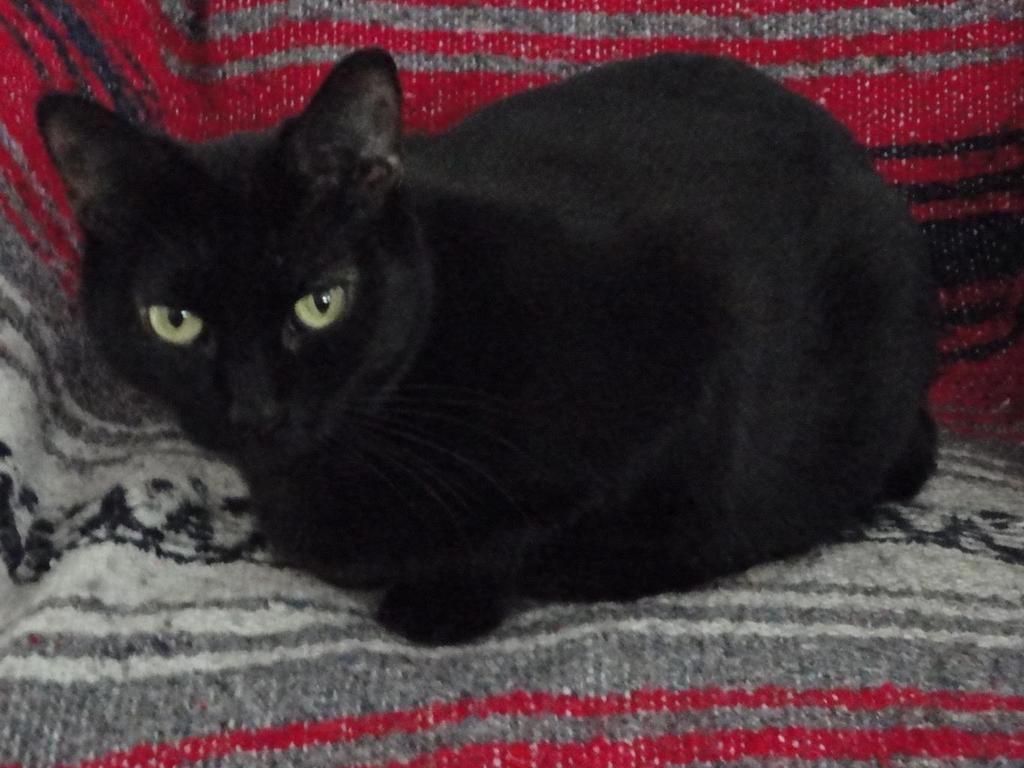